Embu Ward Representatives have endorsed a proposal to exempt persons living with disability from paying trade license fees, permits, cess and market charges in order to promote their entrepreneurial endeavours.

The County Assembly committee on Finance and Economic Planning proposed to introduce waivers for the physically challenged business people on all charges levied on traders by the County Government as an incentive to encourage them to venture into business as a way of generating income.

Kyeni South MCA, while seconding the second reading of the Embu County Finance Bill, 2019, said the committee introduced a clause requiring any person registered with the National Council for Persons with Disability would henceforth be required to apply to the County Government for waiver of the levies.

Nominated MCA Bernard Kandia lauded the move as a noble idea that would uplift the livelihoods of the people living with disability across the county by enabling them to trade without being harassed for lack of trade licenses. He however warned against abuse of this provision by unscrupulous able-bodied businessmen.

Minority Leader Lenny Masters Mwaniki also noted that some dishonest individuals might scheme on how to register their businesses using the names of people living with disability to avoid remitting taxes to the county government. He therefore urged county enforcement officers to be extra vigilant on the loophole.

The Kiambere MCA stated that people living with disability are also not subjected to taxes at the national level and therefore said Embu County was only following the good example set by national institutions to cushion the special interest group from the hassles of having to source for funds to pay for licenses.

On her part, Nominated MCA Ednah Muisyo thanked the Finance Committee for considering waiving the trade licenses and permit fees for people living with disability, saying that despite being astute entrepreneurs, the group faces challenges competing with other traders and therefore needed a morale booster.

The MCAs unanimously adopted the proposal to waive the taxes for people living with disability for the remaining part of the 2019/2020 Financial Year, setting precedence for perpetuation of the waivers in future. 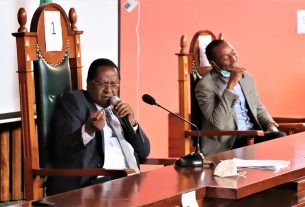