An Embu MCA has raised the red flag over the alleged grabbing of a prime public land parcel by a private developer and demanded the construction of a petrol station stopped immediately.

Ruguru-Ngandori MCA Muturi Mwombo rose during a County Assembly Plenary Sitting to seek a statement on what the County Government doing about the recent annexing of a public utility plot by an influential individual at Mutunduri market, terming it as a matter of concern.

The MCA stated that the private developer had displaced several small-scale traders from their makeshift kiosks on the public land to pave way for the construction of a new petrol station. He however mentioned that the neighbouring community was up in arms against the land grabbing.

Muturi narrated to the House how he had sounded the alarm at an earlier date and endeavoured to establish the actual ownership of the commercial land parcel. He declared that he had gotten seized of documents proving that the land in question was owned by the Embu County Government.

He said he had in his possession the map of the area, search records, allotment letters and also witness accounts indicating that the market land belonged to the public and vowed to fight tirelessly to have the private developer evicted, prosecuted and the land reverted back to the rightful owners.

The Ward Rep warned that if such wanton theft of public property is left unchecked, there was a likelihood that other unscrupulous racketeers would collude with errant county officials to illegally allot themselves prime public plots in various other markets for commercial developments.

Muturi therefore urged his MCA counterparts to take the touchy matter seriously and stand by him in his quest to wrestle the land from the private developer, saying that remaining mum as land grabbers invade his Ward would inevitably lead to a spill over of the vice across the county.

On his part, Speaker Josiah Thiriku pledged to take up the matter and give direction in due course. He conceded that the case was a genuine concern for the August House, but was also quick to mention that there was need to do further consultations before delivering a verdict.

The Speaker noted that land matters are always emotive and advised the MCA to exercise patience and calm his supporters as the County Assembly prepares a ruling on the thorny land issue. 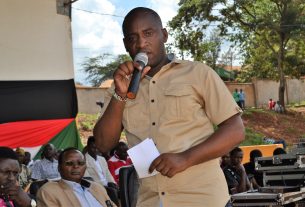